The Bonnet Carré Spillway was designated as a Historic Civil Engineering Landmark by the American Society of Civil Engineers (ASCE) with a ceremony on 13 December at the massive spillway structure in St. Charles Parish. 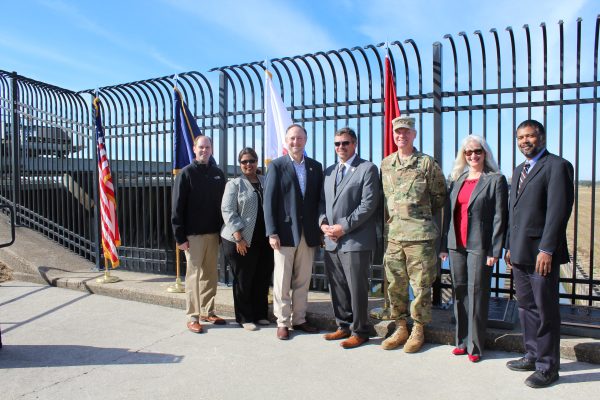 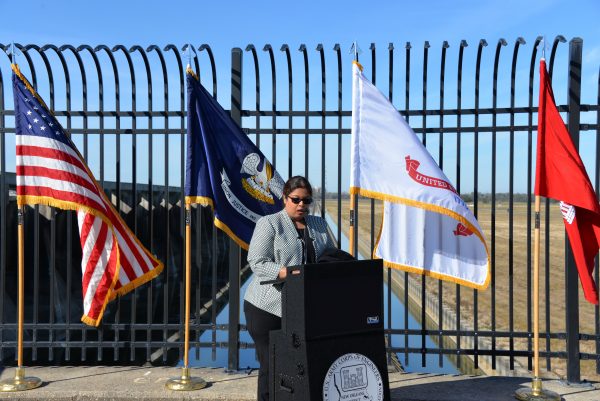 U.S. ARMY CORPS OF ENGINEERS PHOTO BY MATT ROE
Karishma Desai, P.E., of Eustis Engineering gives the welcome address to approximately 40 people at the ceremony to recognize the Bonnet Carré Spillway as a Historic Civil Engineering Landmark. Desai is President of ASCE’s New Orleans Branch. The spillway was constructed between 1929 and 1931 in response to the Great Mississippi Flood of 1927.

The date of 13 December was significant because it was also the day the spillway was dedicated in 1935 as part of Mississippi River flood control.

“I am proud of the ASCE History and Heritage Landmark Committee for working hard in making the dedication happen during my presidency,” Desai said. “It was an honor to be part of the designation of this important flood control structure.”

When opened, the 7,000-foot concrete control structure with 350 bays allows overflow water from the Mississippi River to move into Lake Pontchartrain. The spillway was last opened in early 2016.

The Historic Civil Engineering Landmark Program has recognized more than 200 projects around the world. The spillway, the fifth project recognized in Louisiana, was constructed between 1929 and 1931 in response to the Great Mississippi Flood of 1927. State-of-the-art design was used at that time for foundations, concrete materials, and hydraulic modeling. 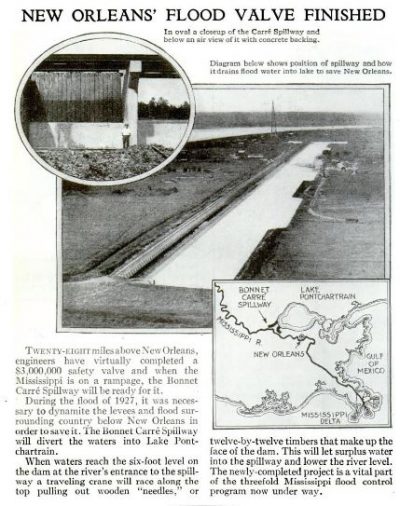 An article on the Bonnet Carré Spillway appeared in a 1931 edition of Popular Science.


“In 1927, the levees were so high that when the levees failed, there was 20 to 30 feet of water stacked up behind the levees. That much water breaking through created some phenomenal problems up and down the (Lower Mississippi) Valley,” Clancy said. “The Corps realized we had to change our ways.”

Because of the catastrophic failure in 1927, Clancy said, four so-called relief values were constructed along the river: the Bonnet Carré Spillway, Morganza Spillway, the West Atchafalaya Floodway in Louisiana, and the Birds Point floodway in Missouri. The Bonnet Carré spillway has been opened 11 times throughout its lifetime, more than any of these other spillways.
The spillway can handle 250,000 cubic feet of water per second – the average annual flow of the Ohio River, the second busiest waterway in the country.
Several dignitaries told personal stories about spillway recreation. Louisiana State Sen. Gary Smith spoke about growing up in Norco, calling the spillway his “second home” – the spot where he hunted, fished, and rode dirt bikes. St. Charles Parish President Larry Cochran noted that he once broke his arm while motocross racing in the spillway.

Cochran also talked about how difficult it must have been to explain the project’s importance to St. Charles Parish residents in the 1930s. “I’m glad I wasn’t in politics back then,” said Cochran, referring to the time when land was expropriated from families whose homes dotted the landscape.

Past president of ASCE National Norma Jean Mattei, PhD, P.E., spoke about other Louisiana landmarks on the list including the Eads South Pass Navigation Works, the Huey P. Long Bridge, the Lake Pontchartrain Causeway, and the McNeill Pumping Station.

Mattei also talked about the behind-the-scenes nature of the spillway.

“In 2011, we were close to the same amount of water that became the 1927 disaster that started the spillway project,” Mattei said. “We operated everything safely, and nobody knows about the flood of 2011.”