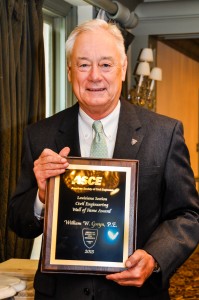 Eustis Engineering Services, L.L.C. President William W. Gwyn was presented the “Wall of Fame” award Sept. 11 by the Louisiana Section of the American Society of Civil Engineers (ASCE). The event was held at the Chateau Golf & Country Club in Kenner.

“You sit behind a desk and you think you’re anonymous, but you’re really not,” Gwyn said. “People really do appreciate what I do. It’s nice to be recognized.”

The “Wall of Fame” honors civil engineers who have made outstanding contributions to the profession. To win the Louisiana Section’s highest award, Mr. Gwyn was required to be nominated by the New Orleans branch of the ASCE, be a fellow or life member of the ASCE at least 55 years old, be endorsed by three licensed professional engineers, and meet other professional criteria.

The professional criteria included significant contributions to civil engineering, lifetime service or involvement in ASCE, and other evidence of character, integrity and/or technical competence.

Some of Mr. Gwyn’s significant contributions to civil engineering include his role as the Geotechnical Engineer of Record for the Inner Harbor Navigation Canal surge barrier in 2014, and his spearheading of Eustis Engineering’s post-Katrina emergency upgrades to levees and floodwalls as well as the design of interim pump stations at New Orleans’ outfall canals. As far as lifetime service, Mr. Gwyn received the Engineer of the Year and Lifetime Achievement Awards from both the New Orleans Branch and the Louisiana Section.

Mr. Gwyn has been an ASCE member since 1970, when he earned his degree in civil engineering. As company president, he encourages and funds participation of Eustis Engineering’s staff in the ASCE and other professional organizations.

“I think the biggest benefit of ASCE is that it provides a vehicle for continuing education and networking,” Mr. Gwyn said. “ASCE also has the added benefit of providing professional journals that are published on a regular basis.”

Randy Eustis, a senior project manager and Executive Vice President at Eustis Engineering, introduced his colleague of 32 years. He spoke of Mr. Gwyn’s involvement in two ground-breaking projects. The first was the extension of runways at the Louis Armstrong New Orleans International Airport, which required portions of the Lake Pontchartrain levee to be relocated. This was the first time a Greater New Orleans levee was reinforced by a private company. The second pioneering project was when Eustis Engineering used dynamic pile testing during the construction of Harrah’s New Orleans Hotel and Casino. This was the first time a private company had used this technology in the New Orleans area.

After a long and eventful career, “the award really is a gold star on his resume,” Mr. Eustis said.