2014 Moving Job of the Year.
This project won the 2014 Moving Job of the Year by the Specialized Carriers & Rigging Association. The bulk material crane pictured here was constructed and tested at the Port of Iberia, then transported by barge approximately 100 miles west to the Port of Lake Charles. This giant weighed in at approximately 1,000 tons and measured 173’ high x 208’ long x 85’ wide. To ensure a smooth and safe transition from ground to barge, Eustis Engineering Services, L.L.C. performed slope stability analyses along the canal bank at the Port of Iberia. Due to soft compressible soils near the canal bank, Eustis Engineering recommended the construction of a relieving platform to carry the load over the unstable bank. The relieving platform comprised 27 steel pipe piles driven to a depth of 90 feet. A massive steel structure was fabricated above the piles to support the barge ramps 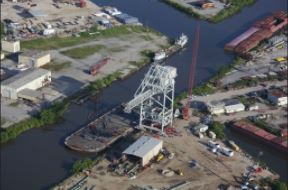 Once the crane arrived in the Port of Lake Charles, it was rotated 90 degrees while still on the barge, then transferred to the concrete pier. It was then set down precisely on the pier’s rail system. “This project was uncommon in that 90 percent of the crane and its components are being manufactured and constructed in the United States, because most of manufacturers for this type of crane are overseas,” said Donald Brinkman, the port’s Director of Engineering and Maintenance. “Even more exciting is that the ship unloader was fabricated right here in Louisiana.”

The total project cost was an estimated $14 million. This was a massive undertaking from start to finish. We are pleased to be a part of an important project to Louisiana. This project is a good example of the high profile geotechnical design services often provided by our Lafayette office.