Eustis Engineering has been engaged with the Bayou Barataria Main Bridge Replacement Project since 2012.  In June 2021, the location of the bridge replacement was revised to cross Bayou Barataria upstream of the previously proposed location.  The original bridge layout was planned to have elevated approaches supported by deep foundations extending into the marsh on the eastern and western sides of the bayou.  The new bridge design will include existing roadways and new approaches for the bridge that will be raised by filling.

Eustis Engineering drilled 24 undisturbed soil borings along the proposed alignment for the bridge, elevated approaches, and pavement rehabilitation.  An extensive effort was provided to obtain permitting for the clearing and drilling operations for the 16 borings in the marsh.  The four borings within the bayou were performed from a jackup barge and the sixteen marsh borings were performed from a marsh buggy.  The four roadway borings were performed with a truck-mounted drill rig.  LaDOTD is currently working to issue a bid package to contractors for Phase I construction, which encompasses bridge Bent Nos. 6 through 9 and the operator house.  Eustis Engineering is working with LaDOTD for the design of Phase II which encompasses the remaining bridge bents, approaches, and the roadway raises and relocations for Highways 45 and 3257.  Phase II geotechnical design is anticipated to be completed by the end of 2022. 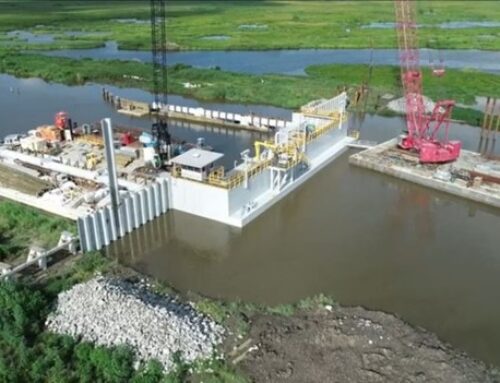