Sean Walsh, P.E., of Eustis Engineering was awarded the Outstanding Young Civil Engineer award from the ASCE New Orleans Branch during a ceremony at Metairie Country Club on 13 July. 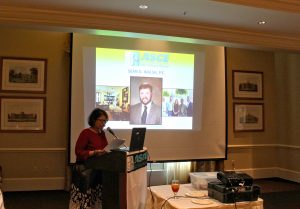 Sean, a project manager, has worked at Eustis Engineering since 2012.  He previously worked as an engineer in the New York metropolitan area for five years.

Recipients of the Outstanding Young Civil Engineer award must be 35 years of age or younger, a member of the ASCE Louisiana Section, and a licensed Engineering Intern or Professional Engineer. Candidates are evaluated on their involvement in ASCE, service to the advancement to the civil engineering profession, service to the community outside of the field of engineering, technical accomplishment, and other evidence of merit or character.

“It is a truly an honor,” Sean said. “I’m humbled to be recognized by my peers. Eustis Engineering has supported my involvement with ASCE, and I’m grateful for having this opportunity to maintain my commitment to ASCE at a local level.”

Sean has mastered multifaceted engineering programs and has managed large-scale governmental projects involving the U.S. Army Corps of Engineers, the Coastal Protection and Restoration Authority (CPRA), and multiple local agencies. Sean has also been a part of several large-scale green infrastructure projects for the City of New Orleans. 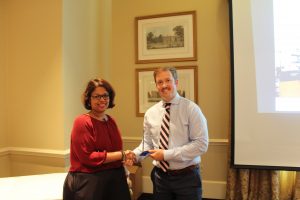 Vice President and CFO of Eustis Engineering Jim Hance said, "Sean has consistently shown great character, work ethic, and leadership.  When I read the evaluation criteria for this award, I could not think of someone more deserving than Sean."

Sean’s experience building community resiliency began in 2008 as a member of Engineers Without Borders. Sean served as Project Manager for a project that brought potable water to a hospital serving 20,000 people in Matunda, western Kenya.

Sean strengthened his ties to the local engineering community in 2016, when he co-founded the ASCE New Orleans Branch’s Younger Member Group annual leadership panel, a successful panel and networking event.

In 2014, Sean was one of ten named to ASCE’s New Faces of Civil Engineering list, a recognition program highlighting the next generation of civil engineering leaders.

Sean received his Bachelor of Science and Master of Science from the Polytechnic Institute of New York University.