Engineers take a stand against sitting 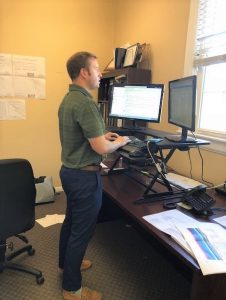 A 2012 article in ScienceDaily notes the typical office worker spends more than 5.5 hours sitting each day at a desk. Scientists say that people who sit all day for years on the job may find themselves with health problems.

'What's the opposite of sitting?'

Sean found himself with an unexpected lower back injury in March 2017.  Subsequently, he was diagnosed with Stage 1 degenerative disc disease.  The chiropractor who provided physical therapy for his back pain said the osteoarthritis was caused by the many hours he’d spent sitting. This had gone on from his pre-school days, through college, and now in the engineering profession.

Sean said he thought, “Well, what’s the opposite of sitting?” He’d heard about sit-to-stand desks and decided to try one to help with his recovery.

Chris LeBlanc (Engineering, Metairie) says his standing desk has helped resolve the hip pain he was having.  He works on his computer about half the day while standing on a thick rubber mat.

“Any job you have that you do at a desk, the standing desk can be beneficial,” Chris said. “And mentally, it keeps you more engaged and less easily distracted.”

Sean and Chris both change their activities and work areas frequently so standing doesn’t become tedious.

When Sean recently re-injured his back, he found the six to eight weeks of recovery time it had previously taken in 2017 had shrunk to just a few days here in 2018. He attributes this shortened recovery time to his more active-at-work lifestyle. He also stretches “all the time.”

“It’s not always easy to stand,” Sean said, “but thinking of my space as a work station has made me more aware of how I spend my work time, and I’m thankful Eustis Engineering management supported the idea of a standing desk for my colleagues and me.”