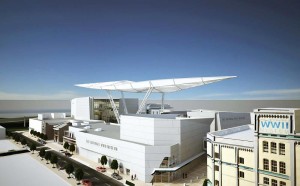 The National WWII Museum’s $325 million expansion project will quadruple the size of the original museum, adding state-of-the-art programs and exhibit space, libraries and archives, and collections and conservation spaces. Some phases of the expansion are already complete, such as the E. J. Ourso Discovery Hall, the Solomon Victory Theater, the Stage Door Canteen entertainment venue, the American Sector restaurant, the John E. Kushner Restoration Pavilion and the US Freedom Pavilion. Three new exhibit pavilions remain to be completed including the Campaigns of Courage Pavilion, the Liberation Pavilion, and the Home Front Gallery. Together, these interactive spaces will portray all campaigns of the war on land, sea, and air; honor each branch of the U.S. military services; and tell the powerful story of life after the war. In addition to these features, a roof structure will be built spanning the individual pavilions to provide shade for patrons. This feature, called the National WWII Museum Canopy of Peace, will consist of an irregularly shaped structure consisting of Teflon coated canvas supported by a metal frame. The Canopy of Peace will be well over 12 stories tall and will be nearly a city block long.  Construction on this feature, which will change the landscape of downtown New Orleans, began in early August.

Eustis Engineering Services, L.L.C. performed a subsurface exploration through a combination of undisturbed soil borings and cone penetration tests. Our professional engineering services included the development of soil design parameters to characterize the footprint of the site, allowable pile load capacity designs, estimates of settlement, and foundation construction recommendations. In addition, we evaluated complex loading conditions for the foundations for the Canopy of Peace.

Wind tunnel testing was performed by others on scale models of the structure. Thirteen separate loading conditions were developed to model potential wind conditions on the structure and its foundations. Each load condition resulted in separate forces and overturning moments in all three axes of the Cartesian coordinate system. Working in concert with the project structural engineer, Eustis Engineering analyzed and revised pile caps and layouts until predicted cap displacements under all potential loading conditions were within project tolerances.